I am an avid collector of railway plans.  Yes, another foible.
Over the years I have enjoyed getting a musty piece of bond paper or a blue print, four cans of tomato soup (to pin the rolled paper to a flat surface, of course), and then poring over it.
One of the two most exciting days of my life was about 20 years ago when I walked into a second hand shop to find this battered canister sitting forlornly in a corner. 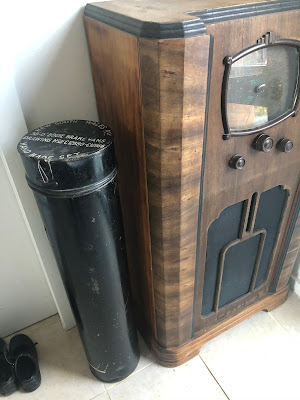 Yes, now it sits at my front door, alongside an equally battered Tasma radio and a pair of battered school shoes.
Closer inspection of that canister revealed the writing on the top as follows: 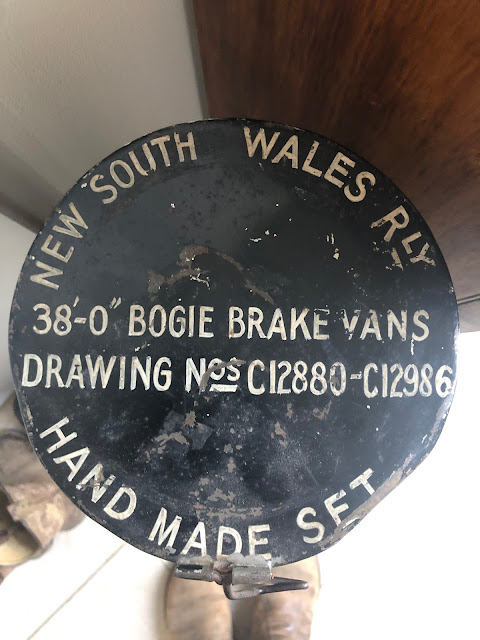 Sadly, the canister was empty.  But the second most exciting day happened when I walked into another second hand shop on another day to find a plan of the NSWGR's Eveleigh precinct, showing the planned destruction of the remainder of a once-great steam locomotive depot in order to build AcDep (the depot to service air conditioned cars).
There are not enough tomato soup tins in existence to show you this plan, but it is curled up in the aforementioned canister, waiting to travel to a certain railway museum once I have shuffled off this earth.
But enough of that - back to plans. I like plans a great deal because I can't draw a straight line.  There is great skill in producing 2 dimensional rendering of 3D objects.  And the Australian Model Railway Magazine (AMRM) and Motive Power magazine have published some very good plans.
What follows is an incomplete list, covering the plans of interest to me from the first 20 volumes of the AMRM (which are now available on CD) and selected issues of Motive Power.  I am not reproducing the plans here - that breaches copyright and is an insult to the work/art of the drafters.  But the following information may help someone track down a plan for modelling or enjoyment.
Posted by Don at 11:13 PM No comments:

Thirty two years ago today (9 June 1988) I have recorded as the first time that 85 class locos worked into the Illawarra on a coal train.  On that day, 8501, 8509, 8504 and 8503 worked 9K55 coal to Port Kembla Inner Harbour.  I can't quite remember who informed me of this trivia (it was probably the Digest), but I wrote it down just for a time like now.
85s were infrequent visitors to the South Coast - especially when compared to their electric cousins the 86 class and electric grandfathers, the 46s.  This is my excuse for having so few photos of them on the Coast.  But here is one about to be there... 8506, 8501 and 8502 at Waterfall on another coalie in 1993.
Happy anniversary! 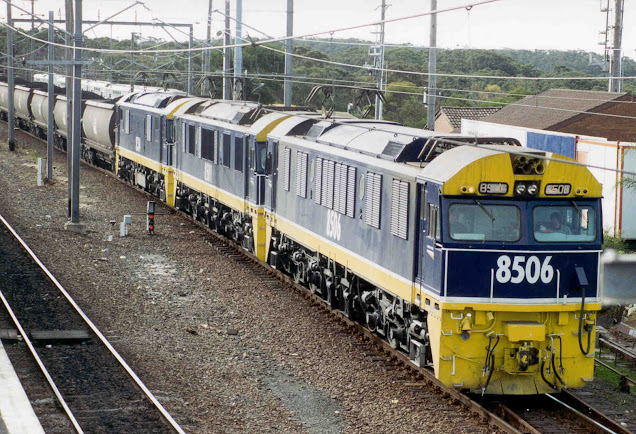 So, here is a bit of change of pace (and scale).
Moving from the 1:1 to the 1:87, I thought I would post a few sides taken around the Illawarra Model Railway Association's (IMRA's) first major model railway, located at the Wollongong Police Boys Club.
The IMRA club layout was a spaghetti plate of tracks, as was typical of the time.  Sharp curves, heinous inclines and action everywhere.  The layout was scenicked in a European/US style, also typical of the time.  And while as a kid I thought it was huge, it was all squeezed into a single, modest room at the Club.
The layout was a basic double loop (half was hidden under a mountain as staging).  An out & back dog leg formed the other part of the layout on the lower level, while a branchline left the main station and made its way up  and around the walls to a terminus.
Several of these shots were taken in the late 1960s, where we liked too over-expose photos. 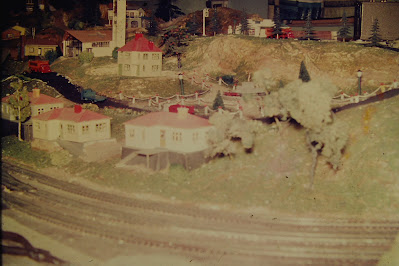 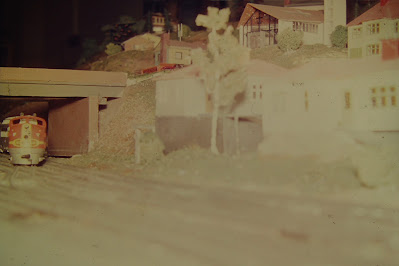 Shortly before the Association moved out of the premises, Senior Rambler and I snuck down on quiet weekday night.  We loaded up the layout with our own rolling stock and fired off the following photos.
Here is an out of focus shot of the main station, showing the turntable at the end of the dog leg.  Aisle width was set at squeeeeeezzzzzzzzzy. 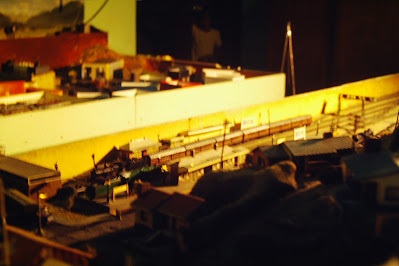 Here is a strangely pitched photo of the south end of the main station, with a brass pig about to pass a near new Lima 38 class on an epoxy CUB set. 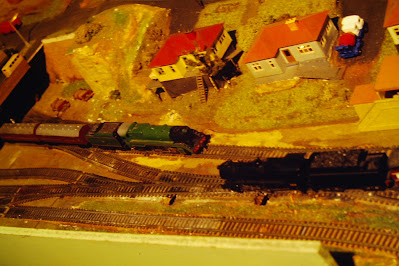 For a short while we turned on the layout lights and killed the room lights.  How is this for atmospheric? Almost Cityrail standard. Certainly meets the Cityrail standard of having no trains. 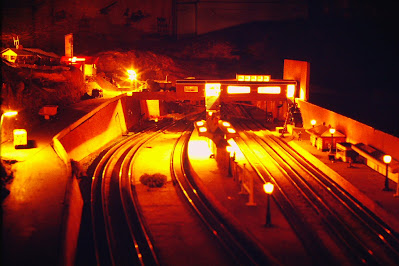 Here's a semi-focussed shot of the loco depot in the dog leg.  No doubt the thrill of seeing a bashed up 58 class made the photographer shake. 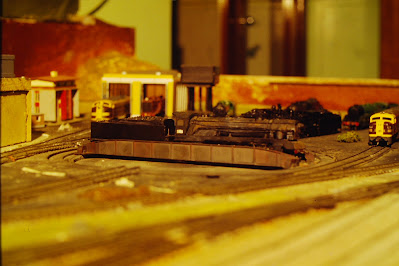 The branchline was notable for a curved trestle bridge. The same epoxy CUB set has been dragged to the end of the line and is returning, using a Workshop 5 41 class (powered by an AHM mechanism). 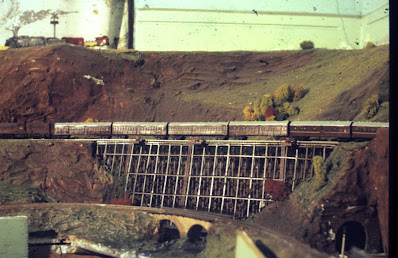 A better-staged shot of the same bridge was made using a brass 50 class. 5173 was a long time inhabitant of the South Coast, so its sort of poetic. 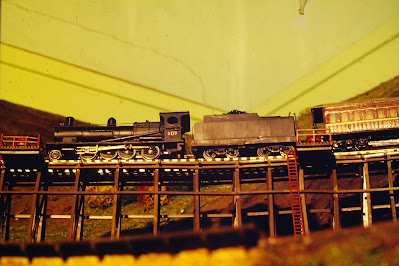 And here is the terminus station, with a set of Freidmont FO cars waiting for the 50 class to stop being a show pony down on the bridge.  The left hand side of the photo shows the dog leg yard. 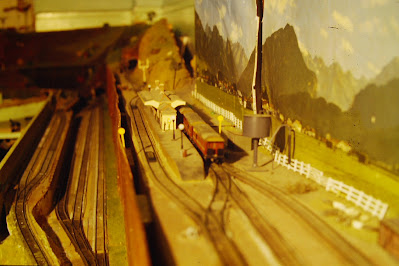 Here is a sneak behind-the-scene peak under the hill.  Clearly no one had read the NRMA's standards for access when constructing the layout.  Its the 1970s so there has to be a new Lima 44 class in view somewhere. 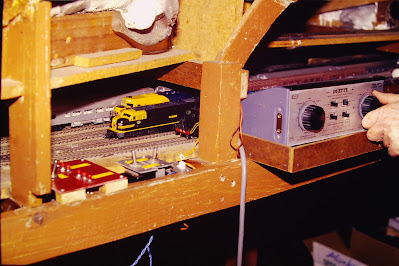 While the layout was evicted, bits of it did live on in our garage before it made a triumphant return to the exhibition scene around 1979.  It was notable for being the heaviest exhibition layout ever.
Back to the big scale and out of the 1970s in the next post.
Cheers,
Don
Posted by Don at 12:49 AM No comments:

More on the green mogul

No, not Rupert or Twiggy.  A real mogul.

About 5 years ago I complained on this blog about the paucity of photos my family had of 2535's time as the Corrimal Colliery shunter. Well, several more have emerged - this time of the visit by 3203 to the Colliery on 14 September 1969.  So here they are! 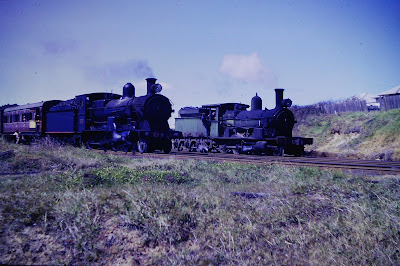 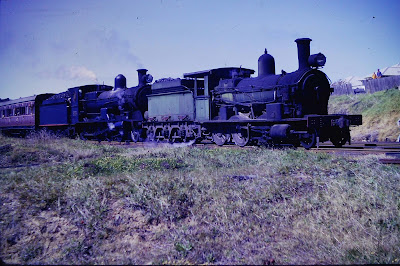 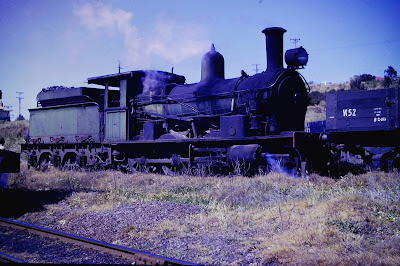 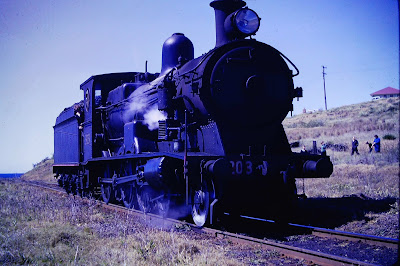 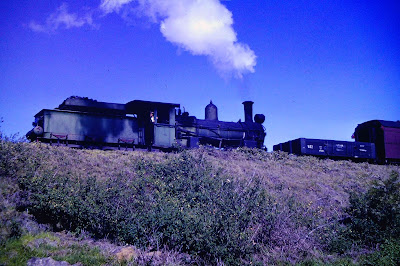 ** Read Bolivia's most excellent comment below - never trust your memory, or that of your father's! ***

According to its own website, Barraba 'is a lovely little country town filled with character and friendly people... and is very proud of its history'.

This series of photos is largely due to a very friendly driver, who allowed a couple of middle-aged rail nuts to shoot out the front of his conveyance during the 55 kilometre journey from Tamworth to Barraba and return one cool winter morning in either 1976 or 1977 (a family debate rages on the timing of this trip).

It is agreed that this journey was undertaken as part of a Nurail excursion. For those under 40 years of age, a Nurail ticket in the 1970s and 1980s permitted the holder near-unlimited travel across the NSW rail & bus network for a relatively modest fee.  It was, in any terms, a bargain. And our Photographer sure knows bargains.

Turning first to the steed - HPC402 - humming away in the dock at Tamworth.  I suspect this photograph was taken after the trip to Barraba as the early morning sun is absent. 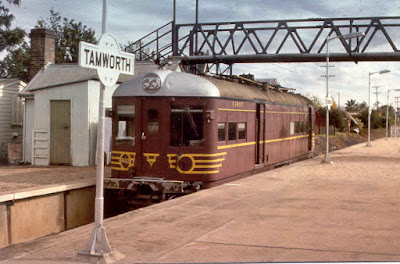 Here is the evidence of the driver's acquiescence to the art of railway photography. First, the West Tamworth viaduct. 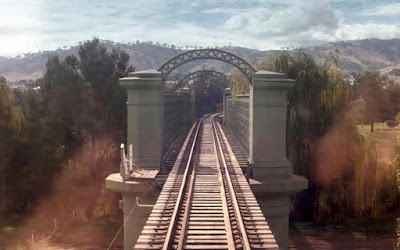 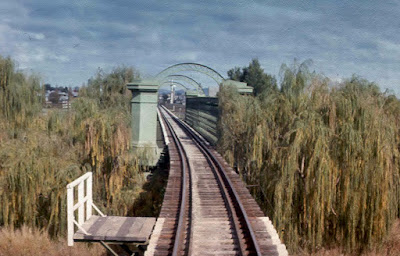 And this is, I think, the rail bridge over Barraba Creek.  Google Maps suggests that it is still in place at the time of writing in 2020. 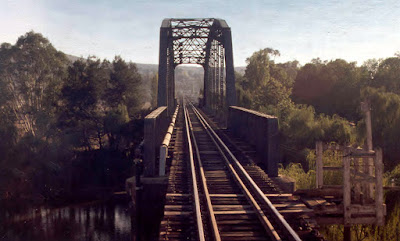 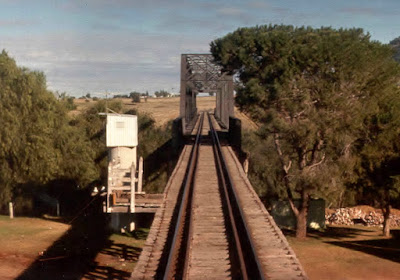 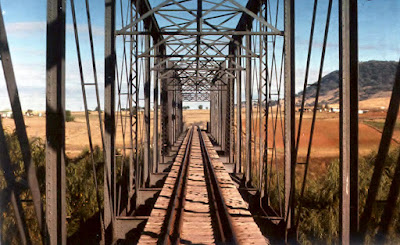 Happy to be corrected - bridge recognition is not a forte.

And to Barraba itself... 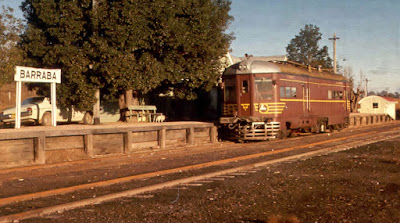 There was a reason for Barraba's branchline - a mine.  4861 was caught posing at the head of a short train with its containerised product.

I am pretty sure I have posted this photograph previously, but I have fiddled with it a bit to get more light onto the side of the train.