As a young boy from the Illawarra who had relatives ‘out west’, I did more than my fair share of trips along the Great Western Highway.  Lithgow was a high point of every trip for a number of reasons.
First of all, travelling over the Blue Mountains was a pretty stomach churning experience for most youngsters.  My reputation for travel sickness, admittedly well-deserved, meant that my parents simply refused to feed me until I had made the crossing which had brought fame to Blaxland, Wentworth and Lawson.  A successful crossing meant the chance to eat buttered tea-cake in the park at Lithgow – usually the same tea-cake that had sat next to me for the entire trip.
A second reason for my love of Lithgow was its yellow submarine and 3-stage rocket.  In its main park, while adults drank tea from thermos, we kids were allowed to play on a submarine-shaped climbing frame of tube-steel.  Adjacent to the submarine was a steel-framed rocket ship which towered over us kids.  Great stuff, even if a little frightening.
Third, on the return trip from out west, Lithgow was tea time for our weary band of travelers.  This meant the purchase a dollar’s worth of hot chips, laid out on slabs of thick buttered white bread, with lashings of Fountain tomato sauce and extra salt added to the mix.  Certainly, a deserved repast for making our way across the golden west!
Yes and I am finally getting around to it, the final reason for my affection for this city was its railway.  Even before arriving from the east, travelling the Bells Line from Mount Victoria the car would be stopped at the top of Memorial Hill, overlooking Lithgow.  Until the trees took hold, this roadside stop provided a magnificent overview of the Lithgow locomotive depot and yard.  The following photograph was indicative of the grimy, indistinct vista available from this vantage point. 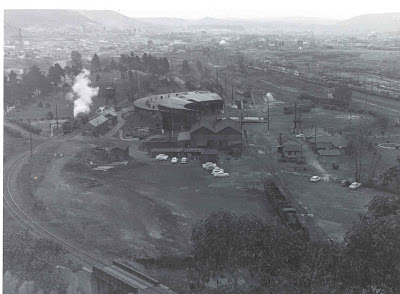 Appetites whetted, it was only a short trip down the hill to the depot.  Frustratingly, the back of the roundhouse faced the road.  This meant that only the adults were authorized in my family to alight from the car with camera to capture the last locomotives on the NSW rail system.  At Easter 1966 one such venture found a weary 3618 stowed for the long weekend. 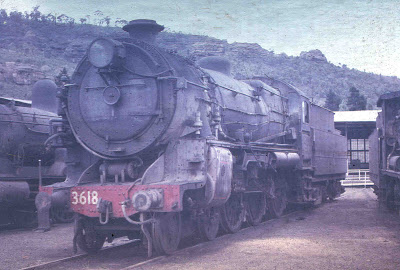 Amongst my earliest recollections of steam are of scenes like the following photograph.  By this time 5135 was a head-lightless yard shunting loco on its last days of revenue service.  I thought examples of steam power of this type were unimpressive – but time has changed that opinion.  5135 is Lithgow steam power. 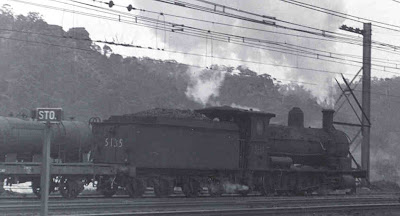 The demise of steam in the west coincided with the demise of several relatives, which reduced the number of trips to and through Lithgow.  Moreover, Lithgow got boring.  48 class locos ‘invaded’ the area, including some from the Illawarra.  There was the chance that an exotic 47 or 49 could be found in the roundhouse, as occurred in this visit in 1982. 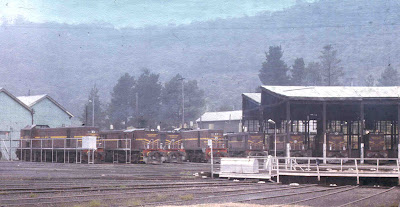 The next trip through Lithgow in 1983 startled me in two respects.  First, as shown in the following less-than-well-composed photograph, the roundhouse was being demolished.  Secondly, and probably for the first time, the sun came out when I had a camera in my hands. 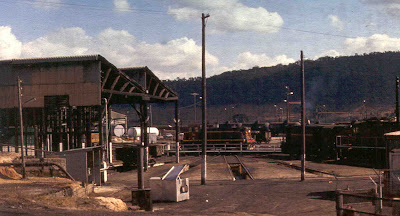 Of course, the demolition of the roundhouse turned out to be a boon for train hunters.  A decade later it was possible to walk right up to the turntable area to get shots of locos in action.

The early 1990s saw a further fundamental change in the use of Lithgow loco depot.  Reductions in the level of locomotive servicing undertaken at the depot, the updating of the electric locomotive fleet and the loss of freight to road transport in central western NSW combined to lower the need for a large depot.  Instead, Lithgow became the graveyard for life-expired electric locomotives.  In some cases this role was conducted with dignity. 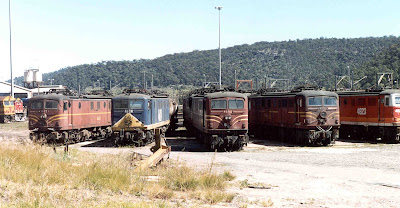 In other cases, dignity was less evident. 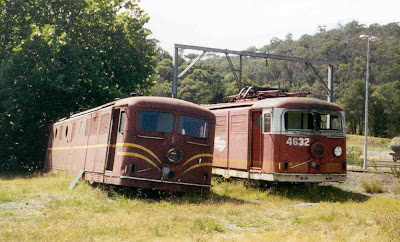 Fast forward through another decade and Lithgow continued with its storage facility role.  By this time it was housing redundant and worn out 48s, 80s, 85s and 86 class locomotives.  As is shown in the following photograph, these inmates were show-horned into every available crevice around the depot. 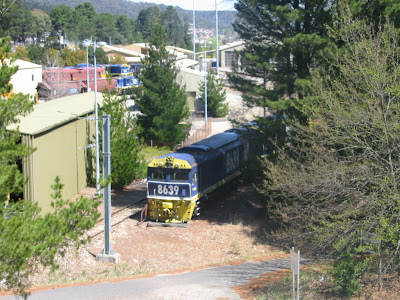 Today photographing the depot’s inmates is a lot more difficult than it was 20 to 30 years ago.  More substantial fencing and an aggressive planting of fast growing trees has obscured many of the old vantage points.  If one persists, the bounty is almost certainly to be a collection of photographs of coal wagons undergoing repair and overhaul.
Still, it remains possible to photograph steam in the 21st century at Lithgow.  Leaving aside the nearby Zig Zag railway and the goings on at the State Mine Museum, the mighty Possum remains at Eskbank House by all accounts. 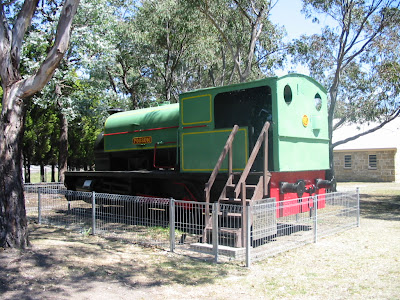